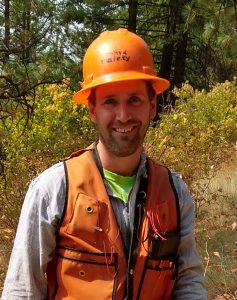 Patrick Whalen was born and raised in the suburbs of Northern Virginia. Shortly after graduating high school, he moved out west to attend the University of Montana where he studied forestry. Since graduating college, Patrick has held several job titles for various state government agencies and private timber companies throughout the Pacific Northwest. A majority of these job duties have either been focused on timber inventory or silviculture. These previous work experiences have helped him in picking his thesis topic, which is studying the effects that silvicultural treatments have on early plantation height growth.

Patrick’s interest in growth and yield models and timber inventory started in college. Patrick was first exposed to the Forest Planning and Projection System (FPS) software as a senior at the University of Montana. His interest in timber inventory was further peaked with his first internship with the Idaho Department of Lands, where he had the opportunity to cruise timber and perform regeneration surveys. Since college, Patrick has further refined his interest and skills in this department by being an Inventory Forester and eventually managing his current employer’s inventory utilizing FPS.

Patrick’s experience in silviculture started directly after college where he was exposed to large scale silviculture projects such as herbicide applications, tree planting, and pre-commercial thinning. These earlier positions have led him to his current role with the Inland Empire Paper Company, where he oversees all aspects of their silviculture program. These current duties cover the entire span of young stand management from managing the seed inventory to pre-commercial thinning.

Patricks interest in exploring this area of study comes from two unique perspectives; one as a Silvicuturist, and the other as an Inventory Forester. As a Silviculturist, Patrick is interested in tree survival and stand establishment. As an Inventory Forester, Patrick has always been interested in harvest scheduling and long term sustained yield analysis. Combining these two perspectives has eventually lead Patrick to question what is the effect that silvicultual treatments have on shortening rotation age and how do these treatments effect long term sustained yield.

You can see more about Patrick on his LinkedIn profile.